The Blue Screen first appeared in Windows NT 3.1 (released in 1993) and they stayed very similar up until the release of Windows 10 (2015) when they revamped it with the sad face image, shown in the image above.

This newer version of the BSOD is more user friendly and doesn’t contain as much information, instead of giving a code it gives us the English translation for it, in the example “CRITICAL_PROCESS_DIED” and a QR code that when scanned takes you to a webpage and explains a little bit about debugging.

The image below shows the older version of a Blue Screen of Death from Windows 7. Note how it provides more information. 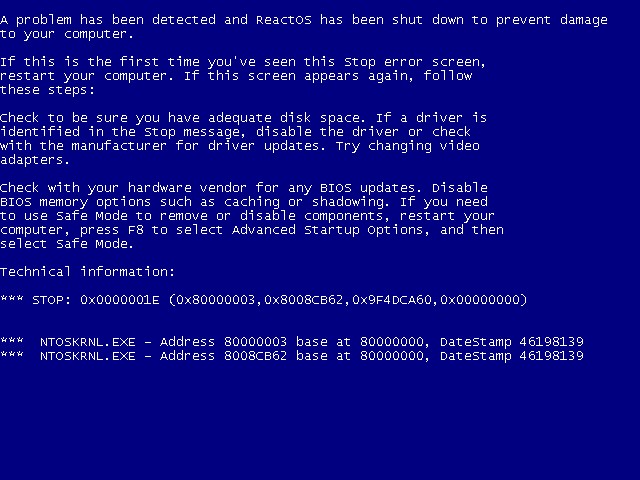 We can see that the stop code is “0x0000001E” and then the parameters for the code are “0x8000003, 0x8008CB62” etc. The last section at the bottom lists NTOSKRNL.EXE which is a fundamental part of a Windows operating system that links software to hardware.

What causes a BSOD?

If you find yourself in a position where you encounter a “Blue Screen of Death” please note down the details from it or take a photo of it and restart your computer. If it happens again then it’s time to troubleshoot. You can find a list of bug check codes from Microsoft here that will be of help you to understand what your specific bug check is for.

If you’re not confident to troubleshoot this on your own then I’d advise giving us a call on 01553 692727 to talk it through with one of our IT engineers.